South Dennis, MA, is a village in the town of Dennis on Cape Cod. Of Dennis' five communities, South Dennis is the only one without direct access to the ocean, but that doesn't make it any less desirable of a location.

What South Dennis lacks in oceanfront properties, it makes up for with accessibility, as the village sits right along the Mid-Cape Highway, or Route 6, which is the fastest way to head anywhere on Cape Cod.

You'll also find Follins Pond, a medium-sized body of water where you can boat and fish, in South Dennis, creating endless recreational opportunities.

About 3,600 people live in South Dennis, and once you begin looking at homes in the village, you'll quickly see why it's properties are some of the more sought-after on the Mid-Cape.

South Dennis has a few neighborhoods with varying levels of inhabitation.

The vast majority of homes in South Dennis are in the areas around Follins Pond and Kelley's Bay, a section that takes up much of the village's west side. These neighborhoods have homes of all sizes, with some even having direct access to the water.

The center of town is where Route 6 and Route 134 meet. Here, you'll find a commercial area featuring a movie theater, a shopping center, and numerous restaurants and retailers. There are a few homes to the west of the business district, as well.

To the east of the commercial center is an industrial zone that is home to all kinds of local contractors, in addition to Dennis Public Works and other town facilities. The Cape Cod Rail Trail runs through this portion of South Dennis, too, but it doesn't have any residential sections.

On Route 134, just north of the commercial center, is an area featuring many of the town's offices, in addition to the Dennis Police Department. Heading northeast, you'll come across a few more small residential areas before entering East Dennis.

The history of South Dennis

South Dennis' history is a little more complicated than other parts of Dennis because there is a belief that Follins Pond had visitors before the arrival of European settlers in 1639. The story revolves around the idea that Vineland, the legendary land that Leif Erikson wrote about, is actually the area around Follins Pond.

Researchers have never come across concrete evidence of Viking exploration on Cape Cod. Still, it's interesting to think that visitors might have spent time in South Dennis about 600 years before European settlement began.

For now, the official story is that South Dennis, much like the rest of Dennis, was part of Yarmouth until 1793, when it separated and became a town all its own.

Things to do in South Dennis, MA

Although it's small geographically, you'll find a lot to do without having to leave South Dennis.

For starters, there's Follins Pond, which has a boat launch on its east side. The boat launch does tend to get busy in the morning, but provides the easiest way to get into the pond. Unlike the Bass River and Kelley's Bay, Follins Pond doesn't have speed restrictions, making it a popular destination for watersports enthusiasts.

Speaking of Kelley's Bay, this small body connects to Follins Pond via the Bass River and features a marina. From this marina, you can take your boat into Follins Pond or make the journey down the river to Nantucket Sound. There's a public boat launch on the bay, too.

The Johnny A. Kelley Recreation Area is a park with baseball diamonds, tennis and basketball courts, soccer fields, and a playground. It also hosts a variety of events throughout the year, so once you live in South Dennis, you're sure to stop by here occasionally.

Those who are into ice skating or hockey will be happy to learn that South Dennis has one of the only ice rinks on Cape Cod. Tony Kent Arena is in the village's industrial area, providing a place for beginners and veterans alike to get on the ice.

South Dennis' main retail area affords a break from these other activities and provides a chance to pick up the necessities. On Route 134, just south of Route 6, you'll come across a couple of strip malls and some separate shops, allowing you to do much of your shopping in one part of the village. There are plenty of restaurants in this area, too.

Once you buy a home in South Dennis, you'll quickly learn just how convenient the village is for travel to other parts of the Cape. All you'll have to do is get on Route 6. From there, reaching Yarmouth, Hyannis, and Harwich is possible in a matter of minutes.

Of course, you'll also learn that South Dennis has everything you'll need in life, including a bustling shopping area and some outstanding recreational opportunities.

When the time comes to buy a home in South Dennis, look to the experts at Kinlin Grover for more information or to begin the process. 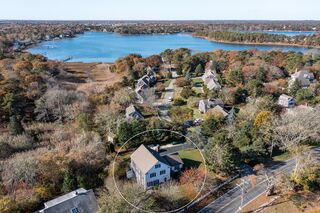