Yarmouth was inhabited by the Wampanoag and was originally called “Mattacheese.” After it was settled by John Crowe, Thomas Howes and Anthony Thacher, Yarmouth was incorporated as part of Plymouth Colony in 1639. It originally included the now neighboring town of Dennis, until it was separated in 1793. The town is named after the English town, Great Yarmouth. The town produced soldiers for various conflicts during the 1600s, including the Plymouth Colony’s expeditions against the Narragansett and during King Philip’s War. The town’s militiamen were also active in the Sons of Liberty movement during the American Revolution.

GEOGRAPHY
Yarmouth has a total area of 28.2 square miles, 14.4 percent of which is water. Its neighboring towns are Barnstable to the west and Dennis to the east. The majority of its border with Dennis is formed by Bass River and its tributaries. Yarmouth meets Cape Cod Bay to the north and Nantucket Sound to the south. The town has three major villages: South Yarmouth, West Yarmouth and Yarmouth Port. Yarmouth’s southern shore is better known for its beaches, while the northern shore consists of creeks and marshland.

Yarmouth is a historical town – the second oldest on the Cape – and features plenty of iconic landmarks, as well as many other attractions including museums, historic sites, beaches, golf courses and most other staples one can expect from visiting or living on Cape Cod. Its close proximity to Hyannis provides convenient access to the Cape’s shopping and travel hub. Historic sea captains’ homes, antique shops and fine restaurants line Route 6A on the north side of town, while Route 28 on the south side features shopping and family entertainment.

The Cultural Center of Cape Cod is located in South Yarmouth and is a nonprofit organization offering a wide range of events, exhibits and educational programs to foster the arts in the Cape Cod community. Exhibitions feature a mix of emerging and established artists in the visual, performance and literary mediums. Galleries in Yarmouth include Fresh Paint Gallery, Linda Lee Fine Art and Ann Sullivan Gallery. The Historical Society of Old Yarmouth keeps the town’s history alive by collecting historical items and preserving the town’s historical sites.

Homes For Sale In Yarmouth 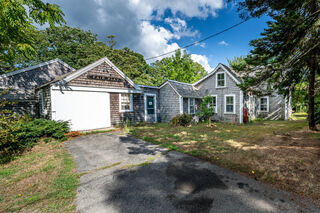