The village of West Dennis, MA, is part of the town of Dennis and has a population of about 2,200 people. This section of Cape Cod is known for its beaches, as West Dennis features multiple sandy areas overlooking Nantucket Sound, and offers some of the region's most breathtaking scenery.

West Dennis is bordered by South Yarmouth to the west, South Dennis to the north, and Dennis Port to the east, putting it in an ideal location on the Cape. The village also has direct access to the Bass River, which runs north to Follins Pond and south into Nantucket Sound.

Living in West Dennis allows you to explore many of Cape Cod's waterways, hike secluded conservation areas, and enjoy first-class restaurants only minutes from your home. The village is small but has enough to keep your occupied, providing a little bit of everything for which the Cape is renowned.

Much like the rest of Dennis, people first settled in West Dennis sometime around 1639. At this time, Dennis was part of Yarmouth, and it was later incorporated into a separate municipality in 1793.

Early industries in the village include saltworks, shipping, and fishing, with West Dennis' easy ocean access providing it with a distinct advantage over other communities.

One of the more famous families to come from West Dennis is the Bakers. This family of mariners ended up producing 29 sea captains, and the village has a school and a park that share the Baker name.

In the late 1800s, wealthy industrialists from Boston and New York began building summer homes in West Dennis, turning the community into a popular resort destination. This reputation was furthered when the town purchased what is now West Dennis Beach in the early 1900s, turning it into a public gathering place.

Many of the large homes from the late 19th century remain, although plenty of new homes have appeared over the years, as well.

The neighborhoods of West Dennis, MA

One thing you'll quickly learn about West Dennis is that it has two streets called Main Street: one running north-south and another running east-west.

The area around the east-west Main Street is the village's downtown. This Main Street is additionally known as Massachusetts Route 28, which is how you'll tell the two streets apart. You'll also know you're on the downtown Main Street because it's full of restaurants and shops, although it does have some residential properties, too.

The other Main Street appears where Old Main Street and Center Street meet, just north of the commercial zone. This Main Street is mostly residential and runs all the way to South Dennis, with numerous small neighborhoods shooting off from it.

South Village is the southeastern section of West Dennis that borders the Swan Pond River. Beaches and houses make up most of this neighborhood, which runs north to Route 28.

The western side of West Dennis between Bass River and Kelley's Pond is called Wrinkle Point. This section of the village is mostly residential, although it also features the West Dennis Yacht Club. Within the Wrinkle Point neighborhood is The Fingers subdivision, which has eight human-made canals that allow for private deep-water docks at some homes.

Things to do in West Dennis

There's plenty to do in West Dennis, MA, as you don't have to cross the Bass River into Yarmouth or the Swan River Marsh into Dennis Port in search of activities.

If you want to take your dog for a walk, there's a park at Fresh Pond with a fenced area, along with trails where you can let your pet roam. For a quick hike, you can explore the park’s trails, or head to the pond for some fishing. Keep in mind that pond access is limited, and you'll likely have to fish from the shore.

Bass River Marina and the West Dennis Yacht Club provide convenient places to store your boat. These facilities come in handy if you want to get on the water regularly once the weather warms. You can also rent paddleboards and kayaks at Bass River Park, a venue famous for its raised boardwalk with views over the river.

Of course, the beaches are the main draw in West Dennis, and West Dennis Beach headlines the list. This mile-long stretch of sand has plenty of parking and enough space that you can usually find a small area to yourself. Other beaches include Trotting Park and South Village, both of which are far smaller and have limited parking.

Most of the restaurants in West Dennis are on Route 28, the village's central entertainment district. This area is also where you'll find many of West Dennis' retailers, in addition to the West Dennis Library. There's a playground just south of Route 28, too.

When you buy a home in West Dennis, Massachusetts, you're putting yourself in a location with unparalleled access to Nantucket Sound, thanks to the community's position on the Bass River.

You'll also never be more than a few minutes from the beach and all kinds of other outdoor activities, while still having access to the village's restaurants and shops.

Overall, West Dennis provides a quintessential Cape Cod way of life that is worth considering when purchasing a home.

Contact the professionals at Kinlin Grover for more information on West Dennis and other desirable locations to buy a house on Cape Cod. 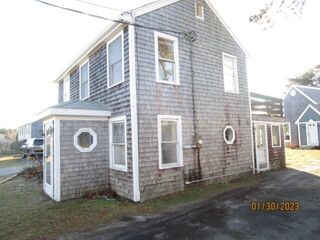