Yes, there is a beach called Monument Beach in Bourne, but this area has much more than that going on. Monument Beach, MA, is also a village, and it presents a peaceful atmosphere with plenty of summertime activities.

Monument Beach has a population of about 2,700 and is situated directly on Phinneys Harbor, with Pocasset to its south and Bourne Village to the north. From the harbor, you can head into Buzzards Bay, and the Cape Cod Canal is just a short distance away, as well.

Living in Monument Beach, Massachusetts, also means being just minutes from the Bourne Bridge. Both Boston and Providence are about an hour away, making it possible to live on the Cape while working in a larger center.

Overall, Monument Beach has everything you could ever want when buying a home on Cape Cod, making it worth considering when the time comes to make a move.

As you explore Monument Beach, Massachusetts, you'll see that it's broken down into a few neighborhoods, with some being more defined than others.

The most populated part of the village is the area near the beach on the village's west side. This section of Monument Beach gets the most traffic in the summer, but it's rarely a hindrance. If you live in this neighborhood, you'll be within walking distance of the beach, as well as a few restaurants and other businesses.

East of the beach is Clay Pond Road, which runs through another significant residential area. There are some private community associations in this part of the village, too.

The south end of the village is the most secluded and features heavy tree cover. There's a baseball diamond and some walking trails here, making it an excellent location for those who want to get out in nature.

Finally, there's Brookside, which is a neighborhood association on the Brookside Golf Club. Brookside is quickly becoming one of the more popular places to buy a home in Monument Beach because of the amenities it offers residents.

The history of Monument Beach

As part of Bourne, Monument Beach, Massachusetts, was first settled in 1640 as part of Sandwich. The town was incorporated in 1884.

In its early days, Monument Beach had a train station that served as a stop for the Old Colony Railroad. Monument Beach Station opened in 1875 and served passengers arriving from Boston. The introduction of this railroad is one of the reasons why Cape Cod became such a popular summertime destination.

The original station burned down in 1906, as a fire ravaged much of Monument Beach. The structure was rebuilt, however, and Monument Station remained in service until sometimes in the 1950s.

The Monument Beach Station building survives to this day, but it's currently a residential property with two units. The home stands out because its platforms, complete with overhangs, are still there.

Things to do in Monument Beach, Massachusetts

What is there to do in Monument Beach, Massachusetts?

A lot, as long as you know where to look.

In the summer, you'll want to spend as much time as possible at the beach. The good news is that the main beach is surprisingly quiet, and provides a pleasant place to relax in the sun. There are washrooms, beach volleyball nets, and concessions at the beach, as well, in addition to a large parking lot.

The north end of the beach is separated from the main beach by some residences. This area features a playground, along with basketball and tennis courts. If you want to relax by the water while the kids play, this is the place to do it.

The main beach is also home to the Monument Beach Marina, which is operated by the town of Bourne. The marina has 61 slips and 35 moorings, along with a public boat ramp, a fuel station, and private showers. There's also plenty of trailer parking.

On the south end of the village is the Little Bay Conservation Area, which features walking trails through the woods. You can walk from the parking lot to the shoreline, and there's a baseball diamond in the area, as well.

For shopping and dining, you'll find a few places to stop on Shore Road near the playground, although you'll have to head north to Bourne Village for most items.

The Brookside Club is a public golf course that also hosts events throughout the year in the clubhouse. If you want to hit the links or host a party, Brookside is a good option.

Monument Beach, Massachusetts, isn't the most fashionable spot with summer visitors, which is good news if you want to live somewhere with a great beach that doesn't get overrun in July and August.

This section of the Cape is close enough to Boston that you can commute while taking advantage of the serene atmosphere, with just the right amount of activity, on weekends.

When you decide to buy a home in Monument Beach, give the Cape Cod experts at Kinlin Grover a call to learn more about this beautiful area. 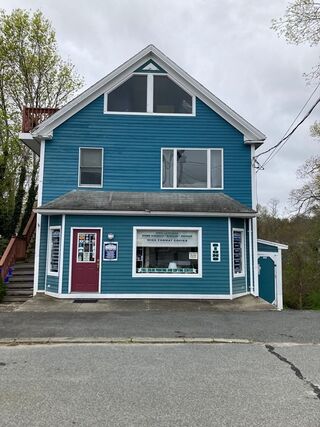