Originally settled by the Nauset tribe, Eastham was the site where in 1620 a hunting expedition landed, comprised from the crew of the sailing vessel Mayflower, which led to the first encounter of the Pilgrims and the local Nauset people at First Encounter Beach. The area would not be settled by Europeans, however, until 1644. Eastham town was officially incorporated in 1651. Fishing and farming were early industries in Eastham, and writers and artists also came to the town. It was in Eastham that Henry Beston wrote The Outermost House. Once home to whaling, fishing, salt works, and asparagus farming,  Eastham is now best known for its beaches and conservation areas.

Eastham has a total area of 25.7 square miles, of which nearly half is water. It is bordered by Cape Cod Bay and the Atlantic Ocean on its western and eastern sides, respectively. Eastham is also bordered by the towns of Wellfleet and Orleans on its northern and southern sides, respectively. There are several freshwater ponds near the center of town, the largest being Great Pond, which has two public beaches. Along the Atlantic coast, portions of the Cape Cod National Seashore include several islands, divided by channels which lead from Nauset Bay and Salt Pond Bay to the ocean. Several creeks and the Herring River run inland from the bay side.

Today, Eastham is mostly known as the gate to the Cape Cod National Seashore,which was founded in 1961 by President John F. Kennedy to protect Cape Cod’s coast from erosion and overpopulation. The natural  landscape sets Eastham apart from other Cape Cod towns with cliffs and dunes, glacial rock, marsh, kettle ponds, forest, and both ocean and bay access. Residents and visitors can enjoy Eastham’s conservancy with miles of walking and bike trails through woods, fields, marshes, and several designated historical sites and areas. The Cape Cod Rail Trail, as well as several other bicycle routes, pass through the town.

Homes For Sale In Eastham 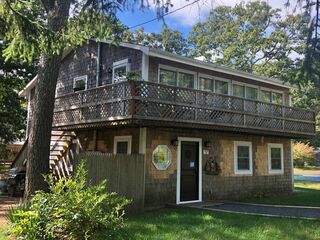