Duxbury, Massachusetts, might be one of the most idyllic places from which to commute on the entire East Coast of the United States. After all, where else can you buy a historic home in an oceanfront community while living only 15 minutes from Plymouth, 40 minutes from downtown Boston, and 30 minutes from the beaches of Cape Cod?

There’s a population of about 15,000 people in Duxbury, with many of its residents taking advantage of its perfect location to work in the city and spend weekends on the ocean, creating an incredible lifestyle that is nearly impossible to match.

In addition to its location, Duxbury is also a historic community with endless cultural significance, and its access to Duxbury Bay, Kingston Bay, and Cape Cod Bay make it easy to spend a day on the water.

If you work in Boston, but don’t want to live in the city, Duxbury, MA, is always worth considering.

Despite its relatively small population, Duxbury is pretty spread-out and, therefore, the town has multiple neighborhoods to check out before buying a home there.

The town’s smallest neighborhood is Cedar Crest, which sits on a barrier beach called Duxbury Beach Park and is separated from the rest of town by a salt marsh. In fact, the only ways to reach Cedar Crest are through the neighboring town of Marshfield or by going over the Powder Point Bridge from the downtown area. Many homes in Cedar Crest are oceanfront, and the ones off the waterfront sit seconds from the beach.

The southeast section of town is called South Duxbury, and it is home to some large residential areas, in addition to a small commercial sector with a few shops and restaurants. With a population of over 3,330, more than one-fifth of the town’s population lives in the community. South Duxbury also has a small beach on Duxbury Bay and a boat launch onto Kingston Bay.

The heart of town is Duxbury Center, which is where much of the commercial activity takes place. There are some residential areas in the downtown area, however, as it has a population of nearly 2,000. Some of the main attractions in Duxbury Center include the marina, some historic buildings, two private clubs, high-end restaurants, and multiple cultural centers. If you live in Duxbury, you’re sure to spend some time in this part of town.

The northwest side of Duxbury is called Ashdod, an area with forests, bogs, and residences. This part of town borders both Pembroke and Marshfield and provides easy travel both north and south because it’s right on the Pilgrims Highway, which goes directly to Boston and Cape Cod.

The history of Duxbury, Massachusetts

Originally called Mattakeesett, meaning land of many fish, by the Wampanoags, evidence suggests human habitation in Duxbury started as early as 12,000 B.C.

When the Pilgrims first arrived in Plymouth in 1620, they were required to stay in a tight community for the first seven years. In 1629, land to the north of Plymouth was given to about one-third of these Colonists, where they set-up farms. Some of the earliest settlers in Duxbury were Captain Myles Standish, who has a monument in his name in South Duxbury, John Alden, and Thomas Prence.

As Duxbury’s population grew, a meetinghouse and church were built. The community also created the Old Burying Grounds, which is the oldest maintained cemetery in the country.

In 1637, Duxbury was incorporated, making it the second town in the Plymouth Colony.

In its early years, Duxbury was a quiet fishing and farming village, but by the early 1800s, it had become one of the world’s best-known shipbuilding hubs. The community was home to 20 shipyards, and this industry brought considerable wealth to the town, which is still seen to this day in many of the historic homes.

Today, Duxbury has settled in as a historic town with a village atmosphere that provides a quiet escape from some of the busier locations both north and south of it.

Things to do in Duxbury, MA

Duxbury, Massachusetts, is loaded with activities, as there’s something for everyone in this picturesque town.

One of the most popular activities in the town is boating, and all moorings are handled through the Duxbury Harbormaster. There is a waitlist for a mooring, however, but you can use one of the town’s boat launches to get out for the day immediately.

When heading to the beach, you’ll likely want to start at Duxbury Beach Park, which is by far the town’s largest oceanfront area. This beach has tons of parking and plenty of space, making it a lovely place to spend a day. You can drive on the beach with a proper OVR permit.

Other oceanfront options include Shipyard Beach and Bumpus Park, which are smaller, quieter options that are good for kids.

If you’d like to go for a swim away from the ocean, Percy Walker Pool is a good option. This indoor pool offers lessons and daily public swims for locals to enjoy throughout the year.

For a bit of culture, there’s the Duxbury Performing Arts Center, which hosts plays and other performances, along with the Art Complex Museum. Locals can also check out the Alden House Museum, the Duxbury Free Library, and King Caesar House, which is where the wealthy Weston family lived in the 1800s.

Hiking is available at the Thaddeus Chandler Sanctuary, the Lansing Bennett Forest, and North Hill Marsh Wildlife Sanctuary, to name a few, and you can head to a smaller beach at Island Creek Pond, as well.

Buying a home in Duxbury, Massachusetts

Living in Duxbury, Massachusetts suits a wide variety of people because it’s such a diverse location. Those who want to live somewhere quiet will appreciate its serene oceanfront atmosphere, while those in search of a livelier time are close to Cape Cod and Boston.

In addition, you can live and play in Duxbury if you work in a larger center, providing an escape from the bustle and chaos that goes along with living in the city.

If you’re interested in South Shore living in the town of Duxbury, give the experts at Kinlin Grover Real Estate a call to go over your options.

Homes For Sale In Duxbury 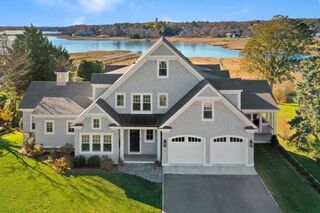