It might come as a surprise to learn that the most populous village in Bourne is Buzzards Bay, which is actually on the mainland side of the Cape Cod Canal. This positioning means that with nearly 4,000 residents, Bourne’s largest village isn’t on Cape Cod at all.

That’s not to say that Buzzards Bay doesn’t encompass everything great about the Cape. The community sits directly on a body of water called Buzzards Bay, along with the Cape Cod Canal, and has a variety of recreational activities for the entire family.

Buzzards Bay is also relatively compact geographically, so everything that you want to do is just minutes from your doorstep. And since you’re already over the Bourne Bridge, you can reach downtown Boston or Providence in about an hour, opening up all kinds of commuting opportunities.

Overall, Buzzards Bay combines all the benefits of living on Cape Cod with unparalleled accessibility, making it a top choice for working families that are looking for their own slice of paradise.

Originally, the village of Buzzards Bay was the territory of the Wampanoag people. European settlement came very quickly after the arrival of the Mayflower, however, as the first homesteaders arrived in 1621. These early settlers gave the area its current name after some birds they encountered near the water, which are most likely osprey but could also have been turkey vultures.

From there, Buzzards Bay would become part of Sandwich in 1639, along with the rest of Bourne, before the community separated to form a new town in 1884.

You’re never far from a body of water in Buzzards Bay, and the ponds and bays are an easy way to define the neighborhoods.

The southernmost part of Buzzards Bay is Taylor Point, which sits at the entrance to the Cape Cod Canal. This neighborhood is home to the Massachusetts Maritime Academy, along with some parks, a marina, and a residential area.

Speaking of Buttermilk Bay, it’s the largest body of water within the village, and numerous houses line its shores. Many of the homes on the bay’s north side have private beaches, including Hideaway Village neighborhood association, while the ones in the south are minutes from the ocean.

Finally, there’s downtown Buzzards Bay, which has Main Street with plenty of restaurants and businesses, in addition to some residential properties. Most of the village’s inhabitants live in the downtown, Buttermilk Bay, and Queen Sewell area.

Things to do in Buzzards Bay

Water access is available in Buzzards Bay, and once you buy a home there, you’ll surely spend a lot of time at the beach or in your boat.

For starters, there’s a small beach with a playground on Queen Sewell Pond. Residents can also carry a small boat to the water from the parking lot to do some fishing.

There’s also a beach with a boat launch on Gardinier Avenue on the Cohasset Narrows. Boat owners can reach Buzzards Bay in a matter of minutes from this ramp or head north through the Cape Cod Canal into Cape Cod Bay.

If you plan to do a lot of boating, Taylor Point Marina is an option, albeit a limited one at the moment. The town of Bourne operates this facility, which includes 148 slips, a gas dock, bathrooms, showers, a marine store, and a public boat launch. There is a waitlist, however, so you can only use the transient slips for short-term stays, rather than the full season.

Buzzards Bay Marina is down the street from Taylor Point, as well. This private facility is much smaller, but often has slips available and also offers winter storage.

Away from the waterway, the Buzzards Bay Recreation Area has a waterpark, along with a playground and a concert gazebo. Residents can also use this park as a starting point for exploring the area along the Cape Cod Canal, which has a walking and biking path and numerous places to stop and fish.

The Bourne Community Center on Main Street has multiple facilities for public use, including a playground, skate park, basketball court, baseball diamond, and softball diamond. There’s also an indoor area with a gymnasium that hosts community events.

Main Street is also lined with restaurants and stores, making it the central shopping hub in Buzzards Bay. You can head over the bridge into Onset for even more dining options, as well.

Living in Buzzards Bay, Massachusetts, puts you minutes from the action of the Upper Cape while maintaining an easy commute to Boston and Providence. The village also has plenty of activities of its own, helping you to get on the water and enjoy the region’s pleasant summer weather.

There are plenty of benefits associated with buying a home in Buzzards Bay, so make sure you speak with the experts at Kinlin Grover Real Estate as you make your decision. 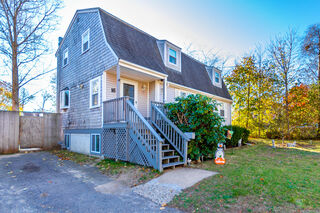