In 1620, the Pilgrims signed the Mayflower Compact when they arrived at Provincetown Harbor. Though the Pilgrims settled across the bay in Plymouth, the area enjoyed an early reputation for its valuable fishing grounds. In 1727, the Precinct of Cape Cod was incorporated as a township. Provincetown grew rapidly as a fishing and whaling center. The population was bolstered by numerous Portuguese sailors, many of whom settled in Provincetown after being hired to work on U.S. ships. Provincetown began to develop a resident population of writers and artists, as well as a summer tourist industry. The town acquired an international reputation for its artistic and literary productions.

Provincetown is located at the tip of Cape Cod, encompassing 17.5 square miles. Surrounded by water in every direction except due east, the town has 21.3 miles of coastal shoreline. Provincetown is bordered to the east by its only neighbor, the town of Truro. About 73 percent of the town’s land area is owned by the National Park Service, which operates the Cape Cod National Seashore. To the north lie the Province Lands, the area of dunes and small ponds from Mount Ararat in the east to Race Point in the west. The Cape Cod Bay shoreline extends from Race Point to Wood End to Long Point, which in turn points inward towards the town, and provides a natural barrier for Provincetown Harbor. All three points are marked by lighthouses.

Provincetown is best known for its beaches, harbor, artists, tourist industry, and as a vacation destination for the LGBT community. Many of the fishermen and artists who came to the area stayed and raised families – there are many families who have lived in town for generations. In addition, there had been a gay presence in Provincetown as early as the start of the 20th century as the artists’ colony developed, along with experimental theater. The countercultural appeal of Provincetown has held steady along with its growth as a tourist destination for national and international visitors. Provincetown’s tourist season has expanded, and the town has scheduled festivals and week-long events throughout the year.

Provincetown boasts a rich cultural history of artists, writers and theater. The Fine Arts Work Center works to encourage the growth and development of emerging visual artists and writers through residency programs. The Provincetown Art Association and Museum promotes and cultivates the appreciation of all branches of the fine arts through its collection as well as special events. There are numerous art galleries and small theaters, and a vibrant nightlife featuring music, dancing and cabaret shows. The annual Provincetown International Film Festival honors the best in independent and avant garde film.

Homes For Sale In Provincetown 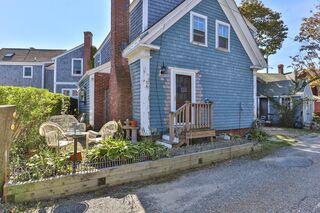