OSTERVILLE
A VILLAGE OF BARNSTABLE

This village of Barnstable was originally inhabited by the Cotochese Native Americans who lived along its shores, where they enjoyed oysters as a local delicacy. European settlers arrived in 1639 and learned to love oysters as well, naming the area Oyster Island Village. Captain Miles Standish negotiated a deed for the land in 1648, acquiring it for the English. The townspeople later truncated the name to Oysterville. In 1815, it was further shortened to Osterville. Crosby Yacht Yard in Osterville, which dates back to 1850, is known worldwide for crafting catboats, Wianno Junior and Wianno Senior sailboats, including John F. Kennedy’s Wianno Senior.

Osterville is located on the south side of Barnstable, with Cotuit to the west, Centerville to the east and Marstons Mills to the north. Osterville’s shoreline is met by Nantucket Sound to the south, as well as inlets that include East Bay, West Bay and North Bay. The Mass Audubon’s Skunknett River Wildlife Sanctuary sits inland. Osterville has a number of ponds, including Neck Pond, Parker Pond, Crystal Lake, Sam Pond, Micah Pond, Joshua Pond, West Pond and North Pond – the latter two of which are located in the wildlife sanctuary.

Like most areas of the Cape, Osterville’s population grows significantly during the summer season. Many Boston-area residents own second homes in the village, which is known for its oceanfront estates. The business district features shopping, dining, a market, banks, public library, art galleries and more. Osterville is home to Cape Cod’s largest privately owned park, Armstrong-Kelley Park. The village is home to renowned Crosby Boat Yard, as well as two country clubs: The Wianno Club and Oyster Harbors Club, both of which have a private beach, golf course and tennis facilities. Oyster Harbors is home to some of the most exclusive properties on Cape Cod.

Osterville is home to a number of art galleries. These include Schulz Gallery, Simple Elegance Antiques and Fine Art, Yankee Accent, Birdsey On the Cape and Kindreds of Osterville, all of which are located around Osterville’s Main Street, in the village’s business district. Not far from there is the Osterville Historical Museum, which displays period decorative arts, furniture, ceramics, full-sized wooden boats, an 18th century herbal garden, 19th century ornamental garden, and more on its two-acre campus. 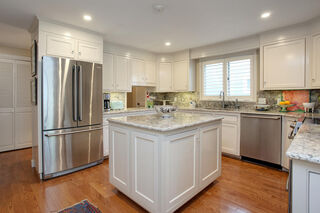