The Pinehills, Massachusetts – A Development Project in Nature

The Pinehills is recognized as a census-designated place in the city of Plymouth, Massachusetts. With over 2,000 homes, The Pinehills has a lot of space for residents, but it's the surrounding natural environment that is the draw for all who move here.

Overall, The Pinehills encompasses 3,060 acres of land between Plymouth and Cape Cod, but only 900 acres can be used for housing. That means that recreational activities, including golf, hiking, and boating, are abundant, as forests and open spaces surround the community.

Living in The Pinehills, MA puts residents in a unique situation where they have all the modern conveniences they'd expect from a newer development while remaining at one with nature and the beauty that the community offers.

The neighborhoods of The Pinehills

Despite its relatively small size, The Pinehills is home to over 40 neighborhoods, each of which features a different style of home. For example, Poet's Corner, Five Lanterns, and Climbers Path offer houses designed by the MacKenzie Brothers, while Briarwood and Vista Point offer Toll Brothers' designs.

There's also Walking Stick and Hickorywood, which are full of cottages, Symington Woods and Hatherly Rise, which are all townhomes and condos, and Seton Highlands, which is a 55+ community.

If you'd like a little more individuality, Ship's Lookout, Ryecroft, Dawn's Light, Talcott Pines have custom homes and features views of the woods or surrounding ponds.

Overall, The Pinehills has designs to meet nearly everyone's needs, as it's one of the more diverse development projects on the East Coast.

The history of The Pinehills dates back to 1891 when thread manufacturer Robert Symington took control of a 3,060-acre piece of land south of Plymouth. The property stayed in the Symington family, mostly as a private hunting area, until 1968, when investor John Talcott purchased it.

Talcott planned to develop the land but eventually sold it off to Digital Equipment Corporation in 1986. This company planned to build an office campus at this location but hadn't done so by 1999 when four new developers, Tony Green, Steve Fischman, Steve Karp, and Tom Wallace, bought the plot.

By 2001, construction was underway in The Pinehills, with the community expanding every year since.

One issue with development is that the area has poor soil, thanks to the glaciers that receded millions of years ago. This soil makes it a difficult place to build. The developers eventually created a plan whereby 900 acres of the land would be used for housing, with the other 2,200 acres being left open for recreation.

This plan creates a lot of open space for residents, in addition to parks, golf courses, and other outdoor opportunities.

Things to do in The Pinehills, Massachusetts

Much of the activity in The Pinehills is found near Village Green, which is a green space in the middle of the community that is surrounded by restaurants and shops. Village Green is also a popular gathering place for locals thanks to its Arts Markets and Mayflower Beer Garden. The beer garden runs every Thursday, Friday, and Saturday night throughout the spring, summers, and fall at the Village Green and features beer, wine, food trucks, and live music. It's a community-building attraction that locals absolutely adore.

The Stonebridge Club is the local community center, and a membership is included when you live in The Pinehills. The club has two swimming pools and a fitness center and also hosts more than 90 clubs that you are free to join.

For outdoor recreation, you'll find countless hills and valleys with trails and paved walkways to explore. These trails are found in every part of The Pinehills, so no matter which neighborhood you choose, there are outdoor activities on your doorstep. You can also head to Gr 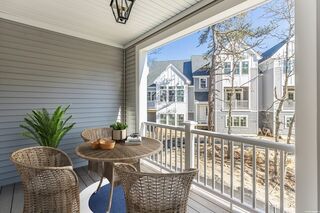