Myles Standish purchased Cotuit from Paupmunnuck, a leader of the Wampanoag tribe’s Cotachesett village, in 1648. Colonial economic activity consisted of raising cattle and harvesting salt marsh hay, as well as some early shipyards. Cotuit’s name comes from the Wampanoag term for “place of the council.” The village was called “Cotuit Port” until 1872, when it was shortened to the modern “Cotuit.” The village’s oldest standing home is the Josiah Sampson House, built around 1793, which stands off Main Street, near the village center.

Cotuit is one of Barnstable’s seven villages and is among the smallest. It has a small but bustling commercial zone near its center featuring local real estate and insurance offices, a public library, a lively restaurant and bar, variety store and grocery coop. The historic Freedom Hall, located near the village green, is used for town gatherings. Cotuit’s northwestern corner is a sub-village called Santuit. Cotuit Bay, the village’s main body of water, sits east of the village. 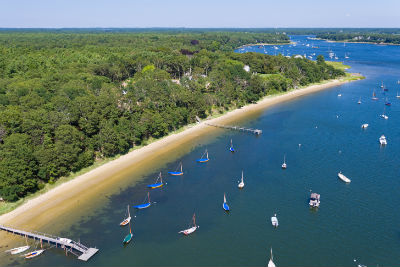 Cotuit is a small, quaint Barnstable village with a year-round population of around 2,600. Despite its

size, Cotuit has a distinct character. The village is home to “Cotuit Skiffs,” a unique design of racing sailboat that has sailed Cotuit Bay for over a century. Cotuit also has its own breed of high-quality, world-renowned oyster. The Cotuit Oyster Company is the oldest oyster brand name in the country and cultivates these oysters, which have a unique flavor as a result of the quality of the water in which they are raised. 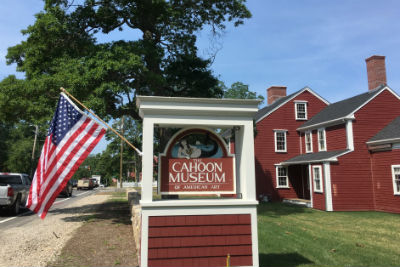 Cotuit is also home to the Cotuit Center for the Arts, a nonprofit, charitable organization founded in 1993. The Center encourages artistic development and exploration and produces year round art exhibits, concerts and theatrical productions. Classes and workshops that focus on the visual and performing arts and beyond are held year-round. The Center also features a movie theater that offers free film series, entries from the Woods Hole Film Festival, and a bar and concession stand. The Cahoon Museum of American Art is a 1775 Georgian Colonial home featuring eight galleries of prominent 19th century American artwork.