Blog / Did You Know? / A Guide to Cape Cod's Herring Runs

It's easy to tell when spring has arrived on Cape Cod, as you'll hear the birds chirping, see the tulips and daffodils ready to bloom and notice the temperatures starting to become more comfortable. There is one more thing that signals springtime on Cape Cod, however, and that's the annual herring run, which occurs when these fish return from the ocean and up local rivers and streams to the area's freshwater ponds to spawn in the summer. 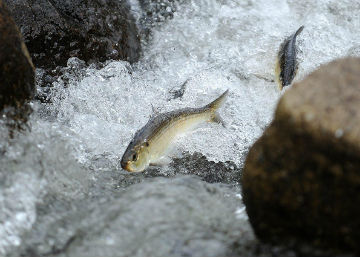 There are two species of river herring in the Cape Cod area, alewives and blueback, and each fish swims hundreds of miles to return to the very same freshwater body where it was born. This phenomenon occurs as the water reaches 50 degrees, so usually between mid-April and the middle of May. You’ll notice how much livelier the fish seem when the water reaches a more comfortable temperature.

Many of the streams and rivers that host this marvel of nature offer excellent viewing opportunities, so you can get out there and see these fish, which are vital to the local ecosystem, continue the circle of life this spring.

The Run at Stony Brook

Perhaps the favorite spot of locals to view the herring run is Stony Brook in Brewster. This location has sloops built into the streams, which guide the way for the herring as they return to a pond right by the Stony Brook Grist Mill. Here, you can stand right beside the brook, so you’ll get up close and personal with the returning fish.

The number of fish that pass through the brook varies from year to year, as over 250,000 herring came upstream in 2015, but only 20,000 in 2017. The overall volume of herring has been increasing in recent years after reaching a low of 11,000 in 2009, thanks in large part to conservation groups restoring the runs to their natural state.

One thing you’ll notice as you watch the herring run is the abundance of seagulls waiting for their lunch. You see, the seagulls know it is spring as well, and return year after year to dine on our returning heroes. Natural predators are a principal reason why less than 1% of young herring make it back to the sea from their spawning grounds.

The Harwich Herring Run takes place just off Depot Street in the West Harwich area. This run goes through the Bells Neck Conservation Area and is home to some substantial efforts to restore the fish’s population in the region.

In fact, the Herring River, which connects many of the ponds through the area, had Cape Cod's first electronic counting device installed in 2016, although other sites now have access to this technology, as well. 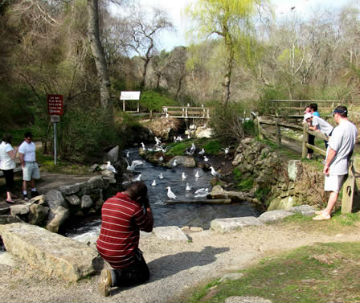 In 2013, a dam was built between Santuit Pond and Santuit River and a brand new fish ladder was installed. The idea is that the fish will see the ladder creating a current, which they will instinctively swim against to reach their destination.

This new infrastructure is all part of a conservation effort to get herring back to Santuit Pond to complete their life cycle and, therefore, increase their numbers. The efforts have worked, as in 2015, the river saw nearly 120,000 herring make an appearance, and the annual estimates are consistently over 40,000.

The Mashpee Herring Run is one of the easiest to access because you can park at the Mashpee Wampanoag Indian Museum and the river herring will swim right by on their way to Mashpee Pond.

The Eastham Herring Run can be viewed from Herring Brook Road at a lookout between Cole Road and Bridge Pond Drive. The fish here swim up Herring Brook toward their pond of choice, with some making their way to Great Pond.

Two new culverts were installed along the brook in 2013, which are used to help the fish make their way through up the stream. Close to 5,000 fish used this route in 2017, up from the under 2,000 the previous year.

Herring River in Wellfleet is a four-mile-long body that leads to four different ponds. The herring in the area come in from Cape Cod Bay before finally settling in one of the ponds for the summer.

We’re only scratching the surface of on the herring runs on Cape Cod, as they take place in almost every community. Other water bodies with well-known runs include Red Lily Pond in Barnstable, Red Brook in Bourne, Stillwater Pond in Chatham, Bound Brook in Dennis, Coonamessett River in Falmouth, Mill Creek in Sandwich, and Long Pond in Yarmouth.

These herring come from Cape Cod Bay, Nantucket Sound, Pleasant Bay, Vineyard Sound, and Buzzards Bay, so if you take a trip and visit a few herring runs, you'll actually see most of the Cape.

Witness a Herring Run For Yourself

Cape Cod has 23 rivers that are being monitored to keep a close eye on the river herring population in the area. While herring in Massachusetts aren't endangered, you can't catch or possess these fish in the state because of their declining numbers.

Herring are vital to the marine ecosystem because they are at the bottom of the food chain. Therefore, they are necessary to feed larger fish and animals in and near the water, helping them to survive. New initiatives are being introduced every year to help protect this vital fish because other sea life cannot survive if they don’t have food.

Those you are looking to buy real estate on Cape Cod should consider checking out the herring runs, as their importance to the natural environment cannot be understated. If you relocate to the Cape, you’ll come to love everything the herring runs represent.